This tour takes you to four premier Tiger Reserves of Central Indian Highlands which gave inspiration to Sir Rudyard Kiplings - The Jungle Book. Covering Satpura, Kanha, Pench & Tadoba, this is the perfect program to meet the Jungle Book characters in real. This program offers a good probability to sight Tiger, Sloth Bear, Leopard, Gaur, Barking Deer, Hard Ground Barasingha, Crocodile & many more mammals and birds. While in Kanha, Pench & Tadoba, the focus is on jeep safaris but Satpura offers a unique way of exploring the park by foot, boat or jeep.

Denwa Backwater Escape is located overlooking the mesmerizing backwaters of a dam built on Denwa River in Satpura National Park, the area popularly known as Madhai. It is built on 10 acres of forested land along the river and across the river is the national park which is approached by a boat and then by jeeps to go deeper into the forest. The lodge offers stunning views of the Denwa River, grasslands across and rolling Pachmari hills. With just 8 cottages and 2 Treehouses, swimming pool and nature library, lodge provides an intimate experience in the jungles of central highlands.

Kanha Earth Lodge is spread in a forested area of 16 acres adjoining the buffer zone of Kanha in a small tribal hamlet. The lodge architecture has been inspired by the Gond tribal villages situated on the fringes of Kanha. The lodge has been built with high standards towards eco sensitivity, local village cooperation and a great wilderness experience. As a conscious decision the lodge is situated remotely, away from the tourism hub, yet close enough for an easy access to the park.

Kanha Tiger Reserve's spectacular Sal and Bamboo forest, rolling grasslands and meandering streams stretch over 1945 sq. km. in the heart of central highlands. This is the original Kipling country so fondly written about in the Jungle Book. The park is the only home to the rare Hard Ground Barasingha found in its large grasslands. Its greatest achievement has been the preservation of Hard Ground Swamp Deer or Barasingha from near extinction. They numbered just 66 in 1970 and today, they number more than 600-700 and are the only surviving population of Barasingha in the wild. Kanha is also home to Tiger, Leopard, Sloth Bear, Deer, Ungulates, Lesser Cats and close to 300 bird species.

Pench Tree Lodge is a boutique experience, set in one of the least explored areas of the Pench National Park. Located in the picturesque village of Sarahiri, the lodge offers its guests proximity to the Karmajhiri gate, and closer home, access to 16 hectares of private forested land to explore and observe the occasional wildlife at close quarters. While at the lodge, the tastefully done up cottages and treehouses offer a serene slice of wildlife heaven, surrounded by undisturbed rolling acres of jungle shrub and trees. The six cottages and six treehouses perched on top of Mahua trees are private cocoons and yet, are at an easy distance from the dining and recreational spaces.

Pench National Park established in 1975 harbors one of the highest densities of prey animals, chased by an estimated 65 Tigers. The landscapes of scrublands, deciduous forest of Teaks and many lakes, streams and Pench River can be instantly associated with the incidents and wild mentions of the animal life in the jungle book of Sir Rudyard Kipling. Pench is popular for Tiger, Wild Dog, Indian Gaur, Jackal & Leopard besides many other mammals & birds.

Tadoba, situated in the Chandrapur District of Maharashtra, was declared a National Park in 1993 and is spread over an area of 625 sq. kms. The rugged landscape comprising of hills, marshes, lakes and streams are predominantly covered with vegetation largely made up of Teak and bamboo forest. Once a little know forest, Tadoba made its place amongst the big names in the tiger circuit after the increase in tiger numbers and sightings in the last decade. Apart from a healthy population of tigers, the park is famous for many other mammals such as leopard, wild dog, sloth bear, gaur, striped hyena, jungle cat and chausingha (the four-horned antelope), not to mention a rich birdlife. 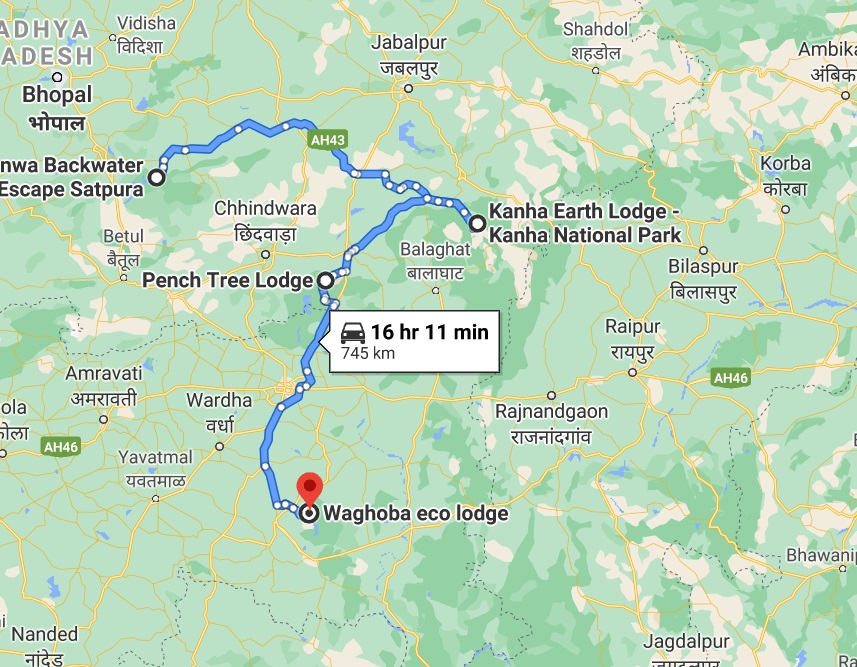