This wildlife tour covering three spectacular parks of central highlands – Tadoba, Kanha & Bandhavgarh – is ideal for a wildlife enthusiast focusing on the Tiger. While Tadoba is primarily a Teak & Bamboo forest popular for Tigers & Leopards, Kanha’s undulating landscape is dotted with dense groves of vegetation, hillocks and meadows. Bandhavgarh vegetation is chiefly of Sal forest in the valleys and on the lower slopes, gradually changing to mixed deciduous forest on the hills and in the hotter drier areas of the park in the south and west. Trip also gives the opportunity to view other mammals like Swamp Deer, Indian Gaur, Wild Dogs, Sloth Bear and an array of other mammals and birds.

Tadoba situated in the Chandrapur District of Maharashtra was declared National National Park in 1993 and is spread over an area of 625 sq. kms. The rugged landscape comprising of hills, marshes, lakes and streams are predominantly covered with vegetation largely made up of Teak and bamboo forest. Once a little know forest, Tadoba made its place amongst the big names in the tiger circuit after the increase in tiger numbers and sighting in the last decade. Apart from a healthy population of tigers, the park is famous for many other mammals such as leopard, wild dog, sloth bear, gaur, striped hyena, jungle cat and chausingha (the four-horned antelope), not to mention a rich birdlife.

Kanha Earth Lodge is spread in a forested area of 16 acres adjoining the buffer zone of Kanha in a small tribal hamlet. The lodge architecture has been inspired by the Gond tribal villages situated on the fringes of Kanha. The lodge has been built with high standards towards eco sensitivity, local village cooperation and a great wilderness experience. As a conscious decision the lodge is situated remotely, away from the tourism hub, yet close enough for an easy access to the park.

Kanha Tiger Reserve's spectacular Sal and Bamboo forest, rolling grasslands and meandering streams stretch over 1945 sq. km. in the heart of central highlands. This is the original Kipling country so fondly written about in the Jungle Book. The park is the only home to the rare Hard Ground Barasingha found in its large grasslands. Its greatest achievement has been the preservation of Hard Ground Swamp Deer or Barasingha from near extinction. They numbered just 66 in 1970 and today, they number more than 600-700 and are the only surviving population of Barasingha in the wild. Kanha is also home to Tiger, Leopard, Sloth Bear, Deer, Ungulates, Lesser Cats and close to 300 bird species.

Kings Lodge is nestled between Sal forested hills of Bandhavgarh National Park in a large natural forested estate of 14 hectares in a small tribal village. Kings lodge is environmentally sensitive, harmonious with the natural features of the site and accentuates natural daylight to all facilities. Local knowledge and art have been incorporated in the development and the lodge has been constructed using local manpower. Our guests benefit from our incredible location, outstanding hospitality, an experienced naturalist team, our commitment towards conservation and local communities.

Bandhavgarh was established in 1968 as a National Park, and is spread over an area of 448 sq. kms. This national park was declared as a tiger reserve under Project Tiger in the year 1993. It is predominantly covered with vegetation like Sal, Sali, Dhobin and has vast stretches of grasslands spread over 32 hills. The region though smaller than other wildlife parks has one of the highest density of tigers in the world. Other than the fort, a 60-foot statue of the sleeping Lord Vishnu (Shesh Shaiya) is famous tourist attractions in the Tala Zone of Bandhavgarh park. With the tiger at the apex of the food chain, it contains 37 species of mammals, more than 250 species of birds, about 70 species of butterflies, a number of reptiles.

Day 01: Arrive Tadoba National Park Arrive at the lodge for lunch. Evening at leisure and overnight at Waghoba Eco Lodge 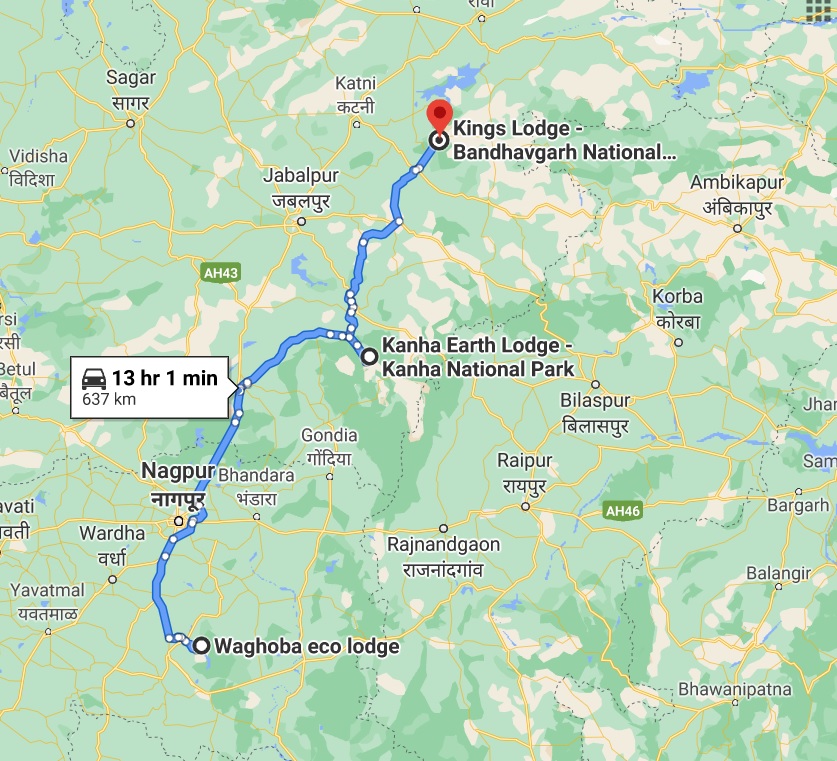