This wildlife tour covers two spectacular parks of central highlands - Tadoba & Satpura - both unique & diverse. While Tadoba is primarily a Teak & Bamboo forest popular for Tigers & Leopards, Satpura is more popular for Leopards, Sloth Bear, Crocodiles & migratory birds. While in Tadoba the focus is on jeep safaris, Satpura offers a unique way of exploring the park by foot, boat or jeep.

Tadoba, situated in the Chandrapur District of Maharashtra, was declared a National Park in 1993 and is spread over an area of 625 sq. kms. The rugged landscape comprising of hills, marshes, lakes and streams are predominantly covered with vegetation largely made up of Teak and bamboo forest. Once a little know forest, Tadoba made its place amongst the big names in the tiger circuit after the increase in tiger numbers and sightings in the last decade. Apart from a healthy population of tigers, the park is famous for many other mammals such as leopard, wild dog, sloth bear, gaur, striped hyena, jungle cat and chausingha (the four-horned antelope), not to mention a rich birdlife.

Denwa Backwater Escape is located overlooking the mesmerizing backwaters of a dam built on Denwa River in Satpura National Park, the area popularly known as Madhai. It is built on 10 acres of forested land along the river and across the river is the national park which is approached by a boat and then by jeeps to go deeper into the forest. The lodge offers stunning views of the Denwa River, grasslands across and rolling Pachmari hills. With just 8 cottages and 2 Treehouses, swimming pool and nature library, lodge provides an intimate experience in the jungles of central highlands.

Day 01: Arrive Tadoba National Park Arrive at the lodge for lunch. Evening at leisure and overnight at Waghoba Eco Lodge. 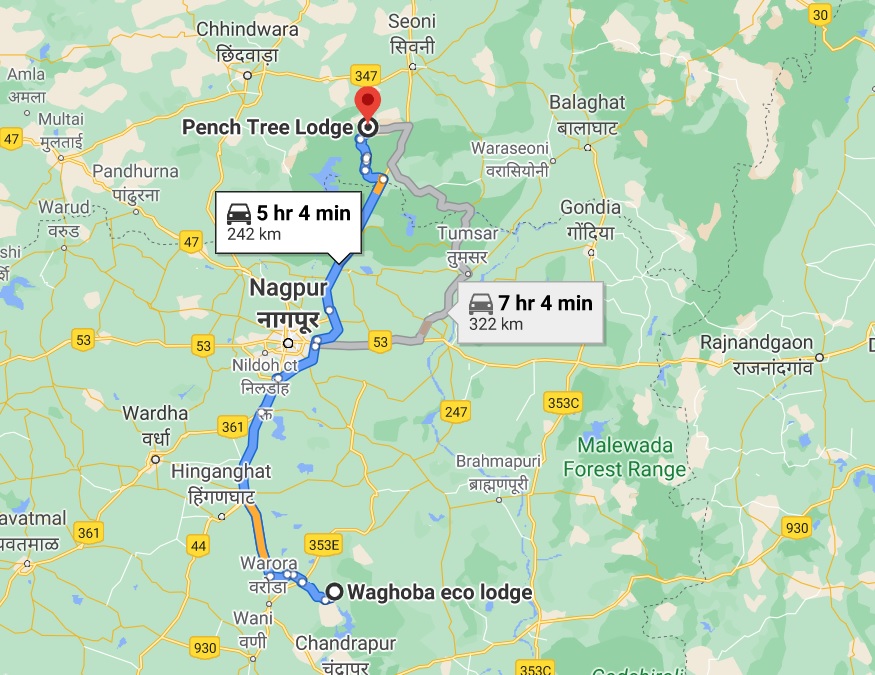