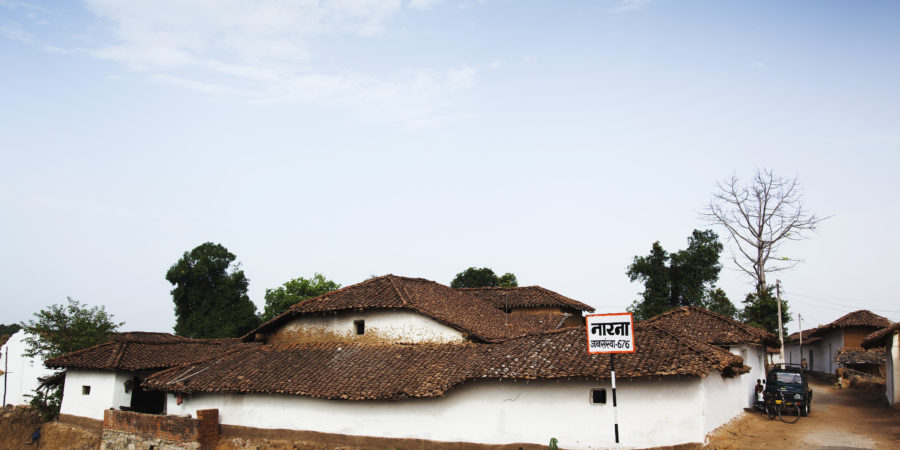 As one drive past the rugged roads of the Kanha buffer area, towards the well secluded Kanha Earth Lodge, located in Narna Village, tucked away from the hustle and bustle of the otherwise crowded central tourist area, one unmissable sight are the vernacular houses of the locals.

As you drive past the paddy fields and flourishing seasonal crops around the periphery of Narna, what you witness are the unique houses painted in blue and white.

Most of the houses in these interior areas, especially in Narna village; belong to the Gond Tribes. One noticeable feature of these houses is how clean they are, despite the numerous activities around them

The Story Behind the Colours:

What intrigues most of the tourists while visiting the Gond tribal households during their village walks, along with the lodge naturalists; are the prominent blue and white colours on the walls. The white colour is basically limestone mixed with water, and the blue colour is achieved by mixing distemper powder with colouring agents, along with the limestone paste and water; both of which are easily available in the local market.

The primary reasons for adopting these colours is the ease of availability in the market, and them being cost effective. The locals also believe that the white colour used in the bottom half of the walls, allows them to easily detect and spot the movement of snakes or dangerous insects even at night, as the white background of the walls helps them stand out.

These colours also act as cooling agents during hot summers, where the locals have witnessed temperatures going well over 50 degree Celsius. These light colours are not just great absorber of heat, they also reflects heat keeping the houses cool, even in scorching summers.

I sometimes wonder, if this simple and yet effective idea from these ancient tribes from Narna, were picked up by the residents of Greece. After all the Greeks paint their houses in blue and white, which in turn attracts throngs of tourists from around the world.

Another interesting observation is the third layer on the outside, at the bottom of the structure, which is the base of the house and acts as a strong foundation holding the entire structure together. Also called as Pirbitti in the local language.

This base is slightly projected towards the outside and is pasted with cow dung. It also serves as a seating area for the locals outside their house during their evening soirèes where the elders from the neighbourhood get together for their daily dose of socialising, while smoking the local flavoured beedi (tobacco rolled in tendu leaves) and unwinding in each others company.

Majority of these structures have cattle sheds in front of each house with at least three four cattle in every household. One noticeable observation in Narna is that male cattle outnumber the female, as the tribals here are more agriculture intensive.

The management of these livestock is mainly carried out by the male members of the household. This involves cleaning, milking, feeding, etc. Cleaning of these shelters is done every day. These sheds have a storing area on the roof which stores the feed for the cattle, and also stores their dung. The dung is used as cooking fuel, and also as a mosquito repellent.

Behind each house you will also find an organic garden which grows vegetables and fruits making the inhabitants self- sufficient, throughout the year. One would also observe that the kitchen is located at the rear end of the house with easy access to the supply from the garden. And also to the water from the wells; located in the back end of these well-structured houses. The well water is used for cooking and washing.

The upper half of these houses are fascinating too, as almost all the houses have a well-built storage area. The entire upper area has a more combined space for storages, than any other purpose. This is mainly because the harvest produced on their land is stored in these storage areas. This storage area is used for storing the livestock fodder, as well. A lot of these houses grow bottle gourd (locally known as lauki) on their rooftops, which is an essential vegetable used in their day to day cooking. The vegetation on the rooftops, along with the top storage unit, further act to cool down the temperatures inside the house during hot summers.

The Lure of Concrete:

More recently many of these traditional houses are being replaced by structures made of concrete and bricks with modern facilities. The irony here is that urban dwellers are now beginning to construct the eco-friendly and sustainable houses in the cities, following the housing model of the Gond tribes of Narna. All this while these ethnic tribes are now beginning to construct concrete houses, as seen in the cities.

Since the government also offers schemes to build new houses by proving funds, the old ones are slowly being done away with in these ethnic villages. The tribes are getting lured by modernity and don’t understand what they are getting into in the name of development. It is only with the passage of time that they will realise that they were far more evolved than most of the urban set-ups.

The need of the hour is to declare a few such villages as heritage villages and preserve them for good.

1 thought on “The Vernacular Houses of Gond Tribals in Kanha”