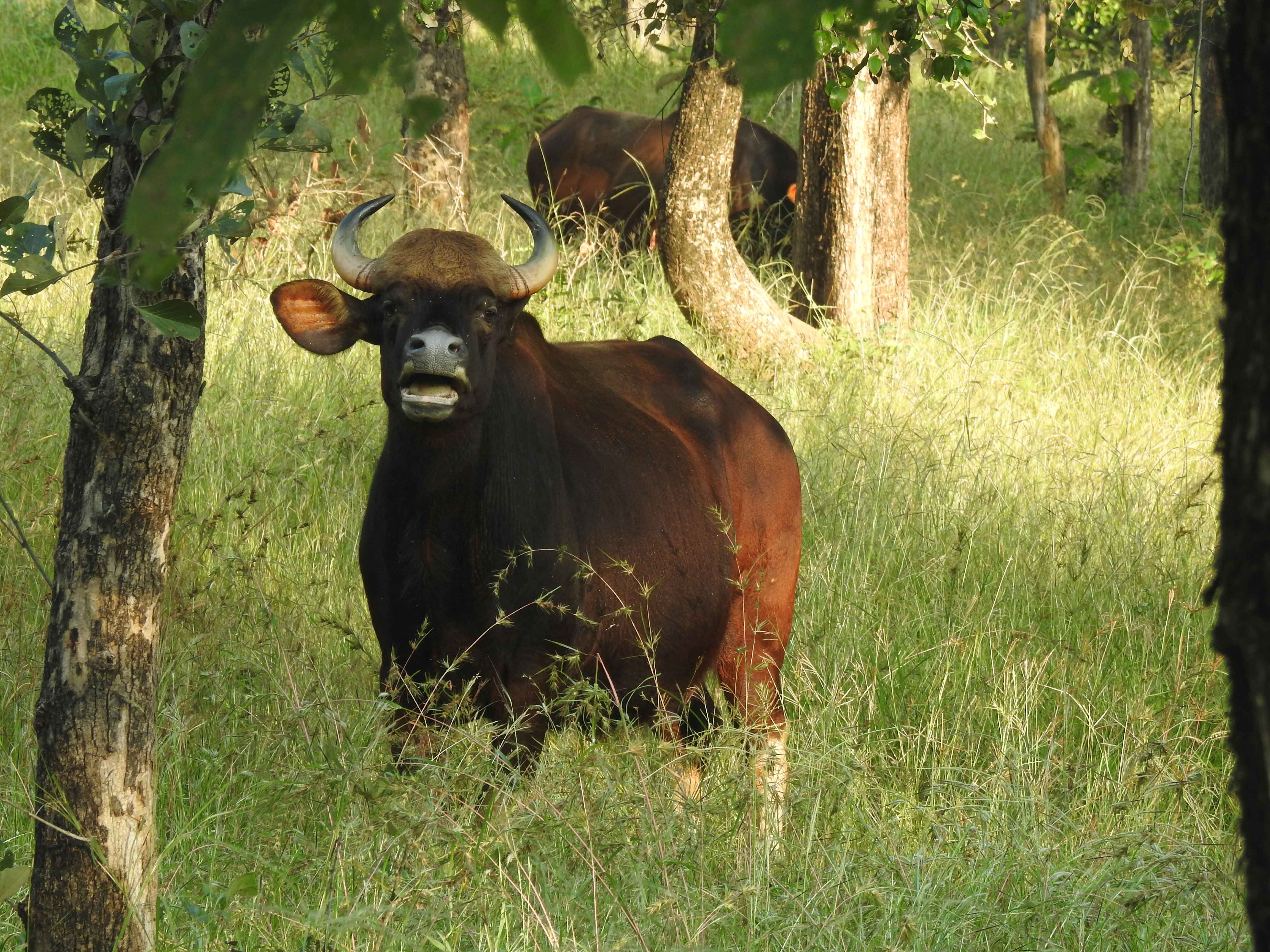 Make way for Hercules – the Gaur of Central India

Central India is home to all sorts of small and big fascinating creatures. It’s easy to forget that there’s more to its wildlife than elusive big and small cats. Here dwells a bulky beast, not the colossal elephant but the largest and tallest species of wild cattle, bigger even than the Cape buffalo, Water Buffalo and Bison. Belonging to the family Bovidae and subfamily Bovinae, the Gaur (Bos gaurus) is known by different names in different Indian dialects such as Gawa in Marathi, Methun in Assamese, Gauri-gai or Gaur in Hindi. In context to Safari tourism Gaur is mistakenly called as Indian Bison which is technically incorrect.

Native to South Asia and Southeast Asia, Gaur is a large animal with a sturdy built. It has a short and deep neck, a massive head and frequently a large dewlap on the throat and chest. Both the sexes have a dorsal ridge which is comparatively well developed in males. It has dark coloured coat with white colour below the knees. This white colour goes from hoof to hock due to which the bovine is often said to be wearing ‘white stockings’. The white stockings are developed in juveniles at around three to four months of age. There is little or no seasonal difference in the colour of the coat. But the inhibitors of dry Sal Forests are less dark than the inhibitors of Teak Forests. 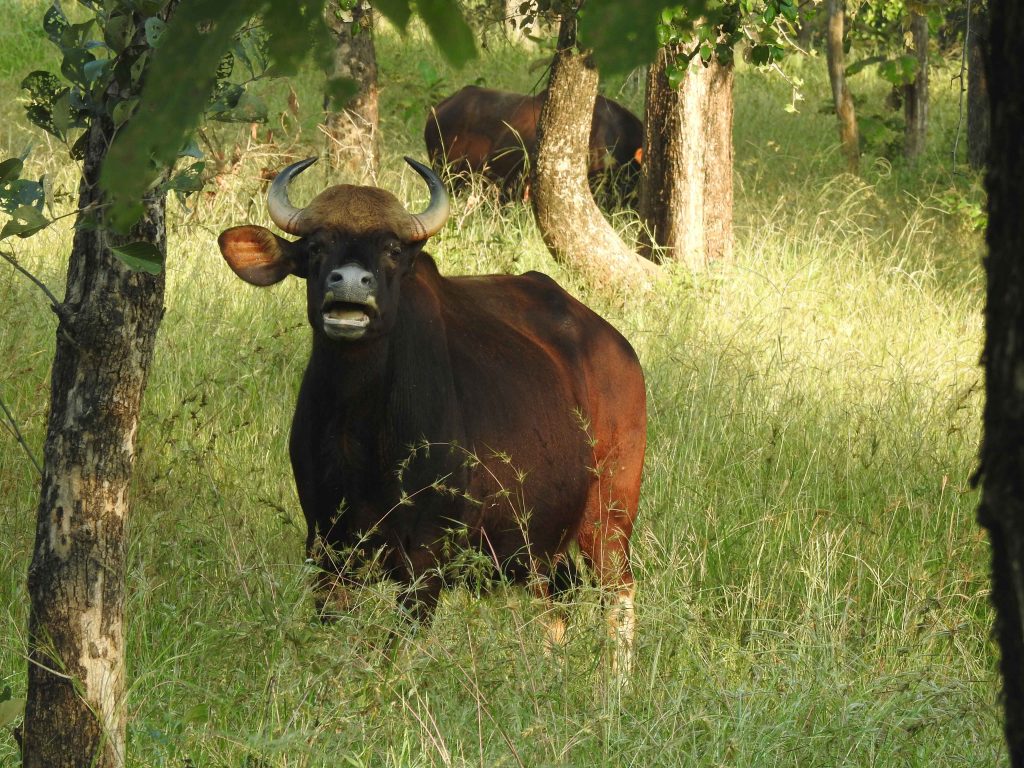 Horns and Tail: Horns are present in both the sexes. The horns may be of any shade between olive-green or brownish-yellow gradually passing into black at the tips. The tail is long, cylindrical and tufted.

Ears and Muzzle: Ears are pointed and medium-sized. Muzzle is large, naked and moist.

Coat: Adult males have short, glistening, black fur while young ones and females are light-brown in colour. The newborn calf is golden yellow which gradually transforms in light brown and then red-brown.

Average Weight and Height: This herculean built bovine can weigh between 650 to 1000 kg. It can reach 165 to 220 cm at the shoulders. Males are about one-fourth larger and bulkier than females.

Habitat and Food: Gaurs primarily are the denizens of evergreen and semi-evergreen forests along with moist deciduous forests with open grasslands. They prefer hilly-terrains below an altitude of 1,500-1,800 m with large and undisturbed forest tracts and abundant water. Their food like that of the wild elephant consists chiefly of grasses, bamboo-leaves and twigs. 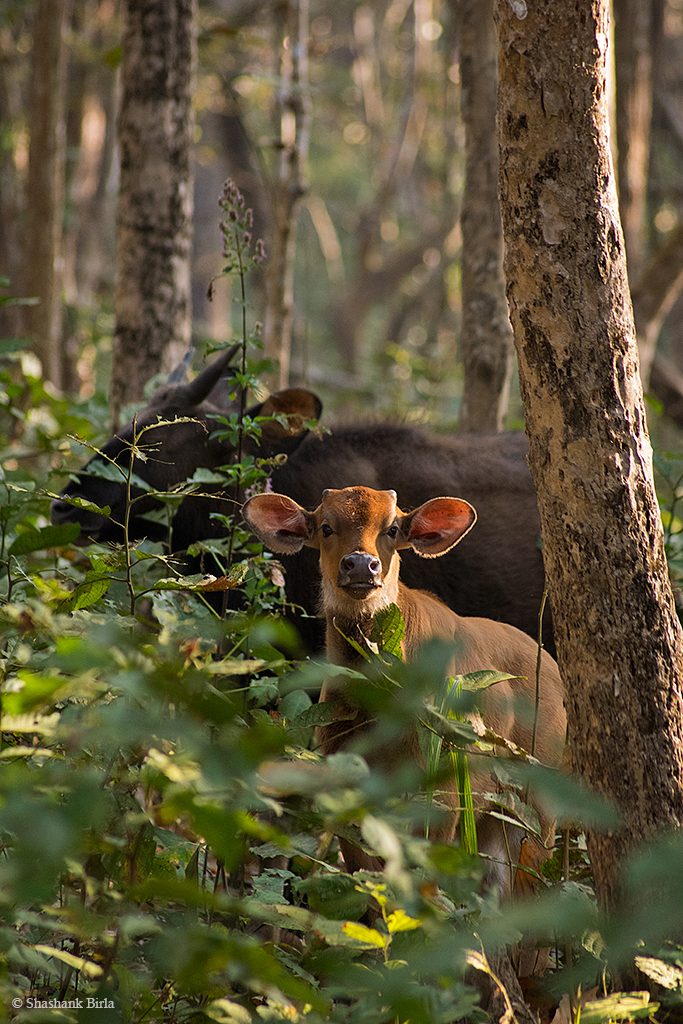 Reproduction: In Central India, most Gaur mate in December and January, and calves are born in August and September. The gestat

ion period is nine months, with one calf per pregnancy.

Historical Fact: In the late 1990s, Gaur went locally extinct in Bandhavgarh National Park, Madhya Pradesh.  In consultation with Wildlife Institute of India, the Government of Madhya Pradesh conceived a project to reintroduce Gaurs in the park. The project was finally approved by the Government of Madhya Pradesh and the Government of India and was carried in two phases. Some fifty Gaurs were translocated from Kanha Tiger Reserve to Bandhavgarh Tiger Reserve in 2011 and 2012. The species play a key role in ecosystem, hence making its reintroduction important in its natural habitat. Reintroduction was eventually successful and at present there is a healthy population of Gaur thriving at Bandhavgarh National Park.

IUCN has listed gaur under the vulnerable category. Habitat loss, Hunting and Human-animal conflict are the major threats to the species.

Gaur is sighted in all the major parks of Madhya Pradesh. With summers hitting the jungles, the Hercules (Gaur) of Central India will stroll down to meadows for water and fresh grass. So it’s time for forests to make way for the bulky beast. 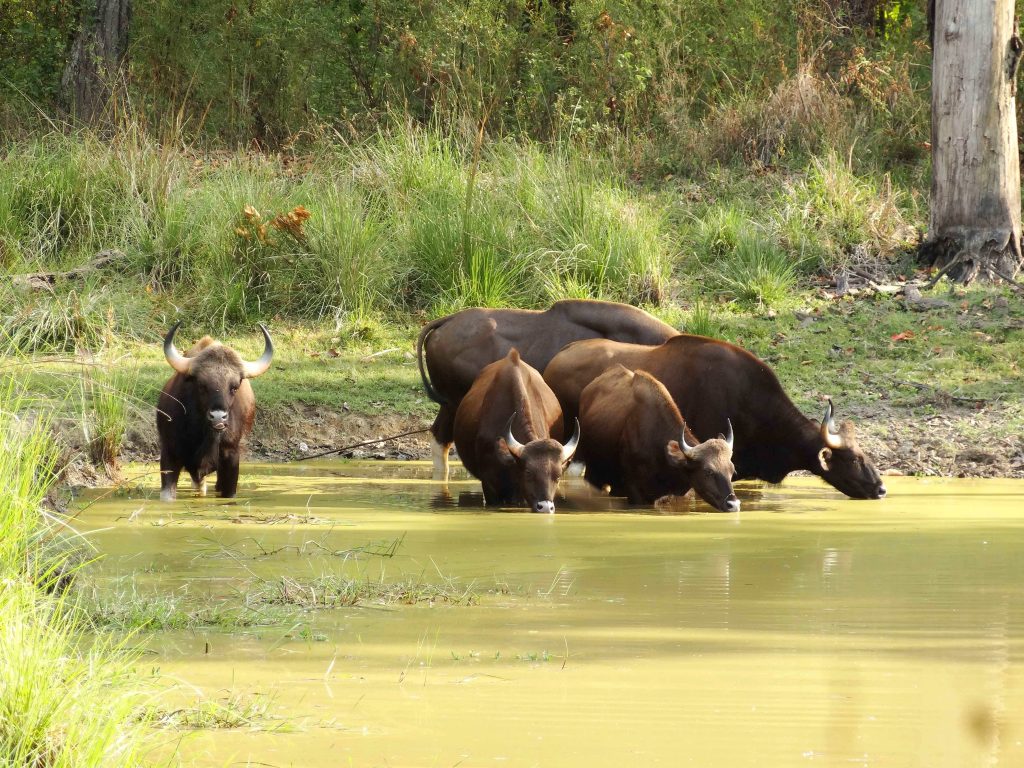