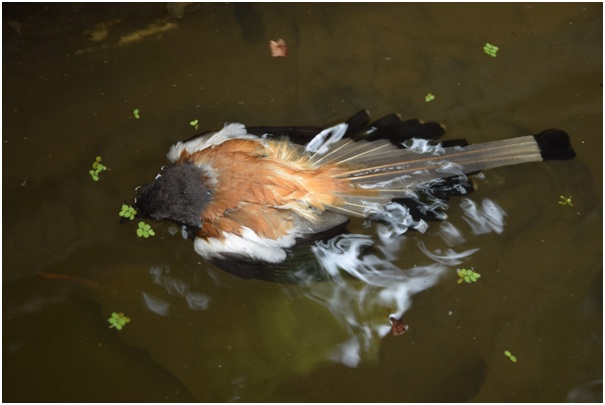 Rescue and Release of Rufous Treepie

The Rufous Treepie (Dendrocitta vagabunda) is a native to the Indian Subcontinent and adjoining parts of Southeast Asia. It belong to the crow family, long-tailed passerine birds (Corvidae) and has loud musical calls making it very conspicuous.

The Indian Tree Pie is a long-tailed rufous coloured bird, with sooty head and neck. The sexes are alike and the main colour of the body is cinnamon with a black head and the long graduated tail. The tail is black-tipped with greyish-white wing patches which are visibleduring flight. The Rufous Treepie is around 45-55 cm from head to the tail. The Weight of adult varies between 90-140 Gms.

The Treepie is a bird of open forest. It is found in wooded country, dry forest, mixed deciduous forest and scrub jungle near towns and villages and freely enters compounds and gardens. Like other corvids it is very adaptable, omnivorous and opportunistic in feeding. They are highly arboreal and rarely come to the ground to feed.It has a variety of calls, some loud, harsh and guttural, others pleasing and melodious.

The Rufous Treepie is an arboreal omnivore feeding almost completely in trees on fruits, seeds, invertebrates, small reptiles and the eggs and young of birds. It has also been known to take flesh from recently killed carcasses. It is an agile forager, clinging and clambering through the branches.

The nesting and breeding season extends from March to July. The nest, well concealed by foliage, is placed near the top of a tree, not necessarily at avery good height. The Rufous Treepie breeds solitary, both parentsparticipate in building the nest, which is lined with rootlets and small twigs. The female lays 3-6 lightgreenish or brownish eggs with darker markings. Both parents share duties in building, incubation and taking care of the young.

Morning around 10.00am, naturalist team from Kanha Earth Lodge, while working in the office heard loud noisy call of the Rufous Treepie. This type of call is normal and everyone ignored itbeing a common sound inside resort. But this time, harsh call continued for almost 6-7 min without anydisruption, hence all came outside to inquire, and found that the poor bird was drowning inside a waterbody, which can be seen in Photo 2.

Is wasn’t moving, immediately drowned bird has been removed from the water. It was totally drenched and immobile, and barely could see any movement and signs of life. After thoroughly cleaning and wiping the bird and covering it with a warm cloth and placed under sunlight. After 2-3 min, noticed that the bird startedshivering and moving its head, shown some signs of life. We have examined the bird for any external injury and bleeding. In Photo 2, naturalist Harpreet Singh examining the rescued bird for wounds and damages.

The signs of external injury and bleeding was absent, and we realised the bird has lost its strength and became too weak. We decided to feed this bird with small chicken pieces.

After feeding intermittently for 20 min, poor bird gained strength and we noticed that now it can fly on its own. We left it in open area and in next 10 min it flew off from the ground and sat on the wooden log for almost 5 min and later flew away, finally resting on a small tree.

It was really a fulfilling day and a learning for few of our staff members. I am sure with this type of efforts, everyone will take care of environment and wildlife around. Save wildlife save nature.

2 thoughts on “Rescue and Release of Rufous Treepie”