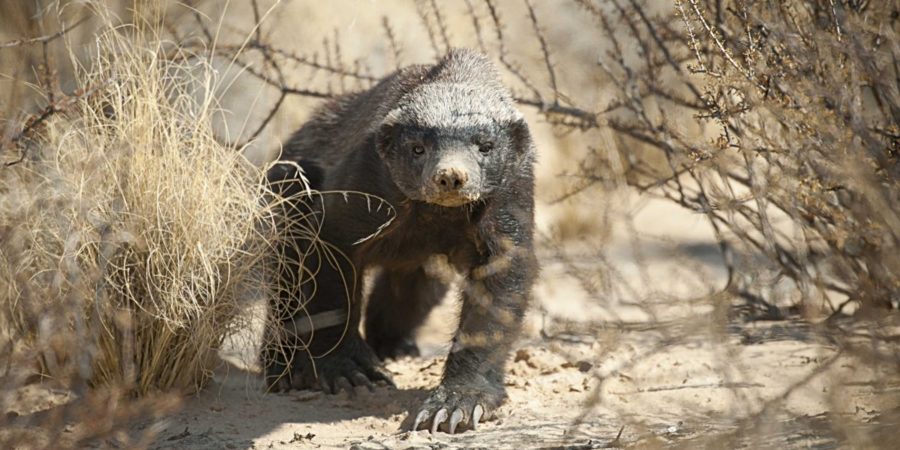 One Fortunate Spring Morning at Satpura: Spotting the Honey Badger

Recently, on a bright, sunny, spring morning our Denwa team of naturalists were driving through the ancient woods of Churna. After a sumptuous breakfast by the lovely meadows, they were headed for the second half of the morning safari.

The birds very boisterously chirping, the deer were unwinding under the canopies, the crocodiles were basking in the morning sun and turtles were swimming around with gay abandon.

As their jeep ambled through the forests, suddenly they stopped on their tracks hearing alarm calls of a peacock. They pulled up their jeep, expecting a leopard or a jungle cat.But, as someone rightly said, “Expect the unexpected.” And Lo! Behold! What they spotted was the world’s most fearless creature(according to the Guinness Book of World Records): a Honey Badger. They could see the elusive being scamper across the trees through the wild thicket. This was a one-of-its-kind sighting, as Honey Badgers are shy, mostly nocturnal beings.

It ambled almost in front of the jeep for a while, sniffed out the area, moving freely, as though posing for photo ops; before crossing the road and disappearing into the dense forest.

The Denwa team’s excitement knew no bounds, as this was one extremely rare sighting.

Honey Badgers are rarely sighted, highly understudied. The team felt privileged to have spotted one, that fortunate morning. Thereafter they proceeded for the rest of their safari with the right doses of awe and excitement.

1. The name: The propensity of seeking out and eating honey and bee larvae gives it a name ‘Honey Badger’. They also eat insects, amphibians, reptiles, birds, and mammals, as well as roots, bulbs, berries, and fruits. Called as: Honey Badger females are called “sows”.  Male Honey Badgers are called “boars”.  Their young are called “kits”.

2. The Family: Honey Badgers, are also known as ‘Ratel’  and are related to skunks, otters,ferrets and other badgers.

3. Behaviour: Honey badgers switch from being predominantly nocturnal in summer and diurnal in Winter. However, in areas where honey badgers are affected by human activities they are usually nocturnal.

4. Adept Diggers: They are able to dig quickly into the tough layer of earth. Within a few minutes, they can dig a hole deep enough to hide themselves.

5. Powerful Chompers : Along with sharp teeth, Honey Badgers also have incredibly powerful jaws.  This helps it eat every part of its prey, including the bones. The jaws are even powerful enough to eat a turtle, including the shell, without difficulty

6. Introverts? : Honey Badgers are usually solitary hunting and living alone. However,during the breeding season they have been observed to hunt together

7. Scavenge and Steal sometimes : Though they hunt for their own food most of the time, they’ll happily steal from other carnivores or scavenge the kills of bigger animals when the opportunity arises.

8. Habitat and Homing: Good at turning rock crevices and hollowed trees into shelters,honey badgers will also make homes in the abandoned dens of other animals like porcupines and yellow mongooses.

9. Thick Skinned and Fearless : Its known that arrows and spears glance off their thick, rubbery epidermis, which is also loose enough. And should a honey badger get caught in the mouth of a predator, it can writhe around and break loose. It also retaliates using its sharp teeth.

10. Resistance to Venom : The honey badger may even have a resistance to snake venom and is sometimes able to sleep off a bite. Their thick skin comes in handy in this way, too. And yes, snakes compose a quarter of their diet too.So, next time if you are in the magical forests of Central India, in MP, keep your eyes wide open. Who knows the fearless honey Badger may cross your path!

So, next time if you are in the magical forests of Central India, in MP, keep your eyes wide open. Who knows the fearless honey Badger may cross your path!